Soaring above the Amazon rain forest with their brightly colored plumage on display, these striking birds are an iconic image of the tropics. The largest of the parrots, macaws are found in a variety of brightly colored markings but perhaps the most famous is the scarlet macaw.

At first it would appear that the scarlet macaw would stand out in the wild but they actually blend in well. Their red and yellow provide camouflage among the similarly colored fruit, hints of green for the leaves and blue for the shadows among the rain forest canopy. 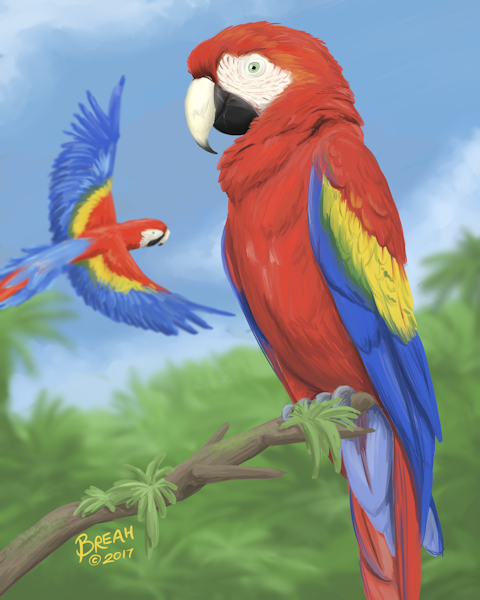 Macaws are social and intelligent birds, mating for life and often seen flying in groups. They are very curious animals, sometimes playing with interesting items by using their feet and beak, even using some items as tools.

The scarlet macaw’s diet usually consists of nuts, seeds, plant stems, insects and fruits. Some of the fruits contain enough toxins to kill other animals but not the scarlet macaw.

They are known for a unique habit of eating clay, which may serve as a source of sodium for the parrots. Some researchers believe this behavior may help in neutralizing the poisons they may ingest.